In the past four decades, the United States has spent $85 billion pursuing the fantasy of an effective missile defense system to shield our nation against the threat of a nuclear attack. Recent public tests, while less exotic than some of the original Star Wars proposals, were spectacular failures and call into question the whole program’s rationale. Neither the land-based system proposed by the Clinton administration, nor the alternatives proposed by earlier administrations, would ever work–regardless of how much R&D money is channeled into the project. Rather than enhancing national security, these doomed efforts would provoke a new arms race and alienate key allies. The authors apply their extensive insiders’ expertise to argue that thoughtful diplomacy is the only real answer to meet America’s national security goals.

Like President Reagan with his Star Wars program, President Bush has again made national missile defense (NMD) a national priority at a cost which may exceed $150 billion in the next ten years. Defense experts Eisendrath, Goodman, and Marsh contend that recent tests give little confidence that any of the systems under consideration–land-based, boost-phase, or laser-driven–have any chance of effective deployment within decades. The interests of the military-industrial complex and the unilateralist views of the Bush administration are driving NMD, not a desire to promote national security.

Rather than increase U.S. security, the plans of the current administration, if implemented, will erode it. NMD will heighten the threat from China and Russia, alienating key allies, and provoke a new arms race and the proliferation of nuclear weapons, all in response to a greatly exaggerated threat from so-called rogue states, such as North Korea and Iran. Thoughtful diplomacy, not a misguided foreign policy based on a hopeless dream of a Fortress America, is the real answer to meeting America’s security goals. Designed to stimulate interest and debate among the public and policy-makers, The Phantom Defense provides solid facts and combines scientific, geopolitical, historical, and strategic analysis to critique the delusion of national missile defense, while suggesting a more effective alternative. 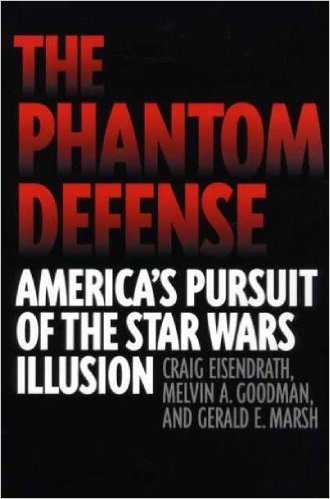 CRAIG EISENDRATH is Senior Fellow with the Center for International Policy, a foreign policy institute in Washington, D.C., and a former U.S. Foreign Service Officer with expertise in nuclear and outer space issues. His articles and commentary on foreign affairs have appeared recently in the Bulletin of Atomic Scientists, The Philadelphia Inquirer, The Baltimore Sun and other publications. He is the editor of National Insecurity: U.S. Intelligence After the Cold War (2000).

MELVIN A. GOODMAN is Professor of National Security at the National War College and Senior Fellow at the Center for International Policy. He is also an adjunct professor at American University and Johns Hopkins University. He was a senior Soviet analyst at the Central Intelligence Agency and the State Department from 1966 to 1986. He has authored three books on Russian foreign policy and is editor of Lessons Learned: The Cold War (2001).

GERALD E. MARSH, a physicist at Argonne National Laboratory, was a consultant to the Office of the Chief of Naval Operations on strategic nuclear policy and technology for many years. He also served with the U.S. START delegation in Geneva and is on the editorial board of the Bulletin of the Atomic Scientists. He is a Fellow of the American Physical Society and has published widely in the areas of weapons technology and foreign policy.