The time for serious soul-searching regarding the role of the Central Intelligence Agency and the intelligence community in general is long overdue. The recent intelligence failures regarding the unanticipated collapse of the Soviet Union, the terrorist attacks of September 11, 2001, and the run-up to the Iraq war demonstrate a CIA and a $50 billion intelligence enterprise that cannot provide strategic warning to policymakers and, even worse, is capable of falsifying intelligence to suit political purposes. It will not be possible to reform the enterprise until we understand and debate the nexus between intelligence and policy, the important role of intelligence, and the need for an intelligence agency that is not beholden to political interests. The recent appointment of three general officers to the three most important positions in the intelligence community points to the militarization of overall national security policy, which must be reversed. The military domination of the intelligence cycle makes it more difficult to rebuild strategic intelligence and to provide a check on the Pentagon’s influence over foreign policy and the use of force. Failure of Intelligence is designed to inform such a debate and suggest a reform agenda.

In this timely and important book, the author offers a provocative mingling of historical description with contemporary political analysis and reform prescription that challenges the conventional wisdom on clandestine collection. The book ultimately and persuasively asserts that the failure to have diplomatic relations has led to the inability to collect intelligence.

“An important and eye-opening account for policymakers and concerned citizens alike.”

In Failure of Intelligence: The Decline and Fall of the CIA, former intelligence official Melvin Goodman chronicles how politicization and lack of vision can undercut and ultimately destroy from within an institution as vital to our nation’s security as the CIA. Importantly, however, Goodman’s thoroughly researched and lucidly written book does far more than recount past problems at the Agency. The most important aspect of Failure of Intelligence is that it looks beyond the past and the present to the future; and in so doing, offers sound and practical advice on how problems such as we’ve witnessed in the past can be remedied and avoided in the years ahead.

“In this study, Mel Goodman tells us that of the misunderstandings, mistakes, and misapplications of American intelligence and force that we’ve seen since 9/11 are nothing new — our CIA has been at it since the early days of the Cold War. But Goodman also tells us, with fresh information and insight, about the CIA’s successes in those years and, most importantly, he names names again and again. His purpose is not payback, or ‘Gotcha,’ but to right a dangerous wrong.”

“One of the agency’s prickliest and most highly regarded analysts, Melvin A. Goodman, has given us an insider autopsy. . . . What is most valuable here is the amassing of insider details.”

This book is required reading for those who wish to understand how the C.I.A. failed to provide strategic warning of the 9-11 attacks and allowed itself to be used by the Bush administration to justify the invasion of Iraq, and what must be done to avoid such disasters in the future.

A senior fellow at the Center for International Policy with 24 years of experience as an analyst at the CIA, author Goodman (Bush League Diplomacy) declares that without efforts to improve the country’s intelligence community, particularly the CIA, “we can expect more terrorist attacks without warning.” Goodman distinguishes early on the CIA’s “proper” function-clandestine intelligence collection-from covert actions like the overthrow of popularly elected leaders that, though tactical successes, have led to false hubris and ruinous foreign policy decisions; in particular, he convincingly attributes the present debacle in Iran to 1953 policies in serious need of revision. Much of the book deals with “the perils of politicization” in the CIA, from the Vietnam war to the present, including the “extreme… kind of pressure placed on the intelligence community” by administrations like Nixon’s and Reagan’s, that latter of whom exaggerated the threat of a crumbling Soviet Union in order to keep military expenditures high. Concluding with the community’s failure to predict 9/11 and the flawed intelligence on pre-invasion Iraq, he castigates the CIA’s “seeming inability” to tell the truth to those in power, “which finds the Agency without a moral compass.” This is an important and eye-opening account for policy makers and concerned citizens alike.

Melvin Goodman provides a disturbing portrait of the collapse of the Central Intelligence Agency. His insider’s look at an organization in decline is a must read by anyone, whether government official or ordinary citizen, who has taken false comfort in the notion of an American intelligence service securing the realm through timely analysis and effective covert action. The reality, an overly politicized agency where ego runs amok, is enough to send shivers down the spine of those who remain cognizant of the fact that there remain serious threats to legitimate American national security interests that must be accurately identified in advance if sound policy remedies are to be had. The CIA portrayed by Mr. Goodman has not only failed to perform this mission in the past, but remains incapable of accomplishing this critical task today. If ever there was a case for fundamental reformation of America’s intelligence services, Goodman’s Failure of Intelligence: The Decline and Fall of the CIA is it. 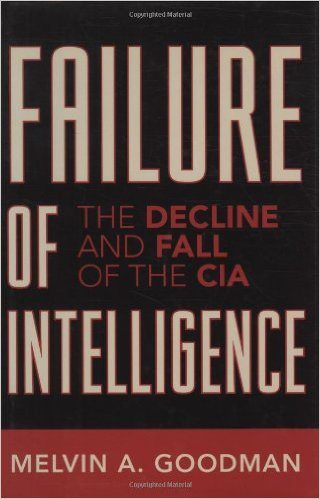