“Whistleblower at the CIA offers a fascinating glimpse into the secret, behind-the-scenes world of U.S. intelligence. Melvin A. Goodman’s first-person account into the systematic manipulation of intelligence at the CIA underscores why whistleblowing is so important, and why the institutional obstacles to it are so intense. Goodman exposes a lot of dirty linen, boldly naming names—not only Agency insiders but journalistic gatekeepers—a very enlightening backstage account of major historical events and how the public has been kept uninformed about them: dangerously so, in terms of our democracy and of many lost lives. Like the high-level assessments he was trained to produce at the CIA, Whistleblower draws from many sources. It is part memoir, part analysis of open sources. At its core, it’s an invaluable historical exposé, a testimony to integrity and conscience, and a call for the U.S. intelligence community to keep its top leaders in check. Urgent, timely, and deeply recommended.”

“Mel Goodman has spent the last few decades telling us what’s gone wrong with American intelligence and the American military . . . he is also telling us how to save ourselves.”
—Seymour M. Hersh, The New Yorker

Melvin Goodman’s long career as a respected intelligence analyst at the CIA, specializing in US/Soviet relations, ended abruptly after twenty-four years. In 1990, Goodman resigned when he could no longer tolerate the corruption he witnessed at the highest levels of the Agency. In 1991 he went public, blowing the whistle on top-level officials and leading the opposition against the appointment of Robert Gates as CIA director. In the widely covered Senate hearings, Goodman charged that Gates and others had subverted “the process and the ethics of intelligence” by deliberately misinforming the White House about major world events and covert operations.

In this breathtaking exposé, Goodman tells the whole story. Retracing his career with the Agency, he presents a rare insider’s account of the inner workings of America’s intelligence community, and the corruption, intimidation, and misinformation that lead to disastrous foreign policy decisions. An invaluable and historic look into one of the most secretive and influential branches of US government—and a wake-up call for the need to reform its practices.

Melvin A. Goodman served as a senior analyst and Division Chief at the CIA from 1966 to 1990. His writing has appeared in the New York Times, Washington Post, Harper’s, and many others. He is the author of six books on US intelligence and international security. 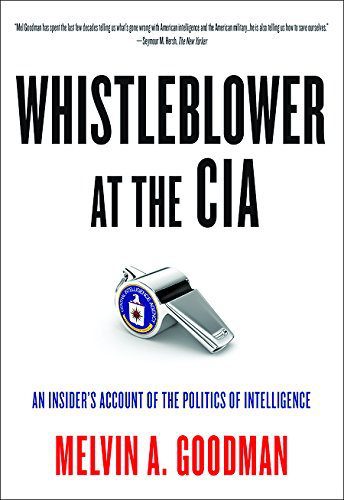