When Eduard Shevardnadze resigned as foreign minister of the Soviet Union in 1990, he ended one of the most remarkable and controversial political partnerships in modern history. Together with Mikhail Gorbachev and Alexander Yakovlev, Shevardnadze led the dramatic Soviet about-face in the 1980s that ended the Cold War and transformed the international political climate. While Gorbachev and Yakovlev focused on domestic reform, Shevardnadze redirected foreign policy. His willingness to act decisively made him the “moral force” of new thinking and the point man for the policies of perestroika. This major book is the first to take a critical look at the many battles Shevardnadze has fought at home and abroad throughout his remarkable career.

Carolyn Ekedahl and Melvin Goodman—veteran observers of the Soviet system—describe and analyze Shevardnadze’s career, beginning with his Georgian past. They assess his responsibility for the Soviet collapse and the leadership role he continues to play in the independent state of Georgia. While sympathetic to what he has achieved, the authors show how Shevardnadze was a product of the Soviet system he sought to change but would help to destroy. He has proven a skillful politician who exploited available instruments of power to advance his career and further his policy objectives. For this book, the authors have interviewed many high-ranking American, Georgian, Russian, and Soviet officials, including Shevardnadze himself and former secretaries of state George Shultz and James Baker. Both Shultz and Baker credit Shevardnadze with convincing them that Moscow was committed to serious negotiations. They conclude that history would have been far different if it were not for the personal diplomacy of Shevardnadze.

As historians and specialists seek to explain the end of the Cold War in terms of endemic weaknesses in the Soviet system and the steadfast policies of the West, The Wars of Eduard Shevardnadze shows the folly of neglecting the essential role played by Soviet leaders who saw the need for reform and implemented policies designed to accomplish profound, but peaceful, change.

Relying mainly on newspaper accounts and interviews, Ekedahl and Goodman argue that former Soviet Foreign Minister Shevardnadze deserves a place in history as a catalyst for bringing an end to the Soviet Union: “Considered the moral force for `new thinking,’ he was the new point man in the struggle to undermine the forces of inertia at home and end Moscow’s isolation abroad.” The authors, the chief of public communications on the public affairs staff of the CIA and a professor of international security studies at the National War College, respectively, begin with a sketchy, unconvincing account of his background (Shevardnadze “was a Georgian, given to innovative thinking and bold actions”) and his rise to power as an opportunist who had a reputation for paying more than the necessary homage to his superiors. They then take the reader thematically through the final years of the U.S.S.R.: here they raise a number of important issues, for example, that Gorbachev’s economic reforms at home required Shevardnadze to pursue stability and predictability abroad; or that U.S. officials slowed the pace of diplomatic change because they were unwilling to believe that Soviet changes were for real. In the authors’ view, Shevardnadze, long the head of the Georgian Communist Party before being appointed Foreign Minister, is a pragmatist at his core; this characterization appears more convincing in light of his conciliatory actions vis-a-vis Russia since he assumed the Georgian presidency in 1992. A workmanlike study, this book is a tentative first step toward addressing what made some of the highest officials in the Communist Party decide to turn long-standing Soviet policies upside down.

Shevardnadze is a survivor of many bruising conflicts. In the Communist Party of his native Georgia, then as Soviet foreign minister under Gorbachev, and now as the embattled president of his small, independent republic, he has shown himself ruthless, authoritarian, uncorrupt, politically adroit, and principled. Ekedahl, chief of public communications on the public affairs staff at the CIA, and Goodman (international security studies, National War Coll.) draw on interviews and published sources to give us as full a portrait as we are likely to get, particularly of Shevardnadze’s role as Gorbachev’s right-hand man in international politics until they bitterly parted company. He was also a key figure in the decisions that helped bring down the rickety Soviet edifice. This is a book for those interested in that seismic event. For academic collections.?

“The book is extremely informative and written in an accessible style that maintains the reader’s interest to the end. . . . [The Wars of Eduard Shevardnadze] makes it even more difficult not to be fascinated with the real ‘deliverer’ of the end of the Cold War.”

“The book employs a strong analytical approach to the study of the role of the individual in shaping foreign policy and the different personal and organizational factors that affect his performance. The Wars of Eduard Shevardnadze is required reading on how the Cold War came to an end, and the last chapter in the history of Soviet diplomacy.”

“The Wars of Eduard Shevardnadze is the first major effort to take a critical look at the many struggles Shevardnadze had at home and abroad during the coarse of his extraordinary career. . . . This work is a readable and useful study for the specialist and the general reader alike. It is a needed addition to any college library.”

“This political biography has fully succeeded in its aim of restoring Shevardnadze’s place in history, providing an indispensable account of perestroika and of the international relations of this period.”

“Eduard Shevardnadze has been the indispensable man twice in his life. First, in the Soviet Foreign Ministry in the closing years of the Cold War and today in his native Georgia as it struggles to emerge onto the world stage. This biography is worthy of this great man.”

“Former senior CIA analysts Ekedahl and Goodman have applied their long experience in analyzing Soviet politics and foreign policy to provide the first biography of one of Mikhail Gorbachev’s closest advisors and most influential colleagues in moving the Soviet Union away from its Marxist-Leninist past. No one in any country contributed so much to ending the Cold War as did Gorbachev and Shevardnadze, and while Gorbachev’s role has been widely recognized, Shevardnadze’s important contribution is made clear only now with this illuminating study. It is important biography, and important history.”

“This well-researched and well-presented book sheds important new light on how the Cold War ended and how the role of Shevardnadze was of central importance to that process. A rewarding read.” 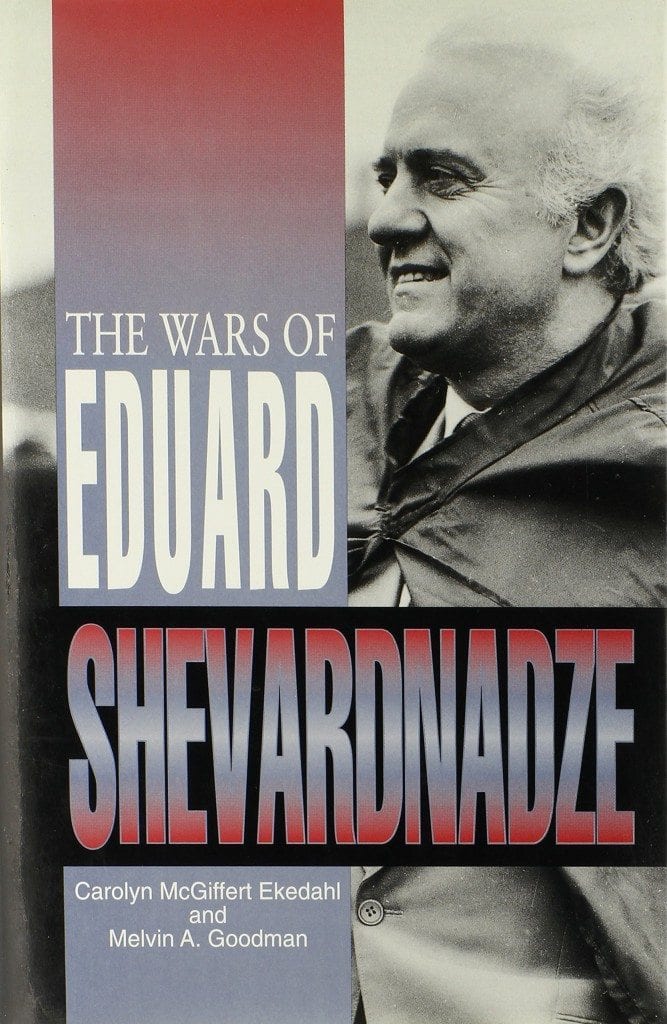 Carolyn M. Ekedahl is Chief of Public Communications on the Public Affairs Staff at the CIA. She is the author of Moscow's Third World Policy under Gorbachev (1990).

Melvin A. Goodman is a Professor of International Security Studies at the National War College. His books include The End of Superpower Conflict in the Third World (1992) and Gorbachev's Retreat: The Third World (1991).