Upon leaving the White House in 1961, President Eisenhower famously warned Americans about the dangers of a “military-industrial complex,” and was clearly worried about the destabilizing effects of a national economy based on outsized investments in military spending. As more and more Americans fall into poverty and the global economy spirals downward, the U.S. is spending more on the military than ever before. What are the consequences and what can be done?

Melvin Goodman, a 24-year veteran of the CIA, brings peerless authority to his argument that U.S. military spending is indeed making Americans poorer and less secure while undermining our political standing in the world. Drawing from his first-hand experience with war planners and intelligence strategists, Goodman offers an insider’s critique of the U.S. military economy from President Eisenhower’s farewell warning to Obama’s expansion of the military’s power. He outlines a much-needed vision for how to alter our military policy, practices, and spending in order to better position the U.S. globally and enhance prosperity and security at home.

“Formidably well informed and written with exceptional clarity, Mel Goodman makes a compelling case that now is the time to return the U.S. military to its constitutional role of defending the nation.”

“In National Insecurity Mel Goodman shows how every president since Eisenhower has ceded authority to the Pentagon, to the detriment of our security and our democracy. But he doesn’t just lament this dangerous condition — he provides a road map for demilitarizing our security policy at abroad and at home.”

William D. Hartung, author, Prophets of War: Lockheed Martin and the Making of the Military-Industrial Complex

Read the Table of Contents and Introduction from Melvin Goodman’s critique of the U.S. military economy from President Eisenhower’s farewell warning to Obama’s expansion of the military’s power.

“With a focus on the most recent such ‘adventures’ in Iraq and Afghanistan, Goodman summarizes much of what any impartial informed view of these wars, especially the Iraq disaster, must conclude–they have been a ‘monumental blunder,’ as former New York Times editor Bill Keller, a former supporter, had to conclude from the evidence a decade into the war.”

“Beyond his prescriptions for finally curbing the money that feeds the military-industrial complex, Goodman also recommends a national recognition that the United States must finally see itself realistically as part of the community of nations, not as a self-directed policeman.”

“Goodman’s value added is his focus on the role of the militarization of intelligence. . . . crucial to establishing that mortal threats to America perennially loom–out there–demanding bloated military budgets and frequent wars. . . . With a convincing accumulation of examples, Goodman reveals how our political leadership’s occasional impulse to arms-control accords or defense budget cuts have come to be thwarted by an ever more powerful Pentagon.”

“Goodman, currently director of the National Security Project at the Center for International Policy and an adjunct professor of government at Johns Hopkins University, has firsthand experience with war planners and intelligence strategists, and critiques the military economy from President Eisenhower through President Obama.”

“Melvin A. Goodman is a damn fine author, and National Insecurity is a damning assessment of U.S. defense spending and covert operations.”

“A 25-year CIA veteran examines how recent presidents have handled the military and defense spending. As he left office in 1961, President Dwight Eisenhower gave a farewell address in which he warned against the influence of the ‘military-industrial complex,’ theorizing that overinvestment in defense could compromise other domestic issues. Goodman (Failure of Intelligence: The Decline and Fall of the CIA, 2008, etc.) claims that in the 50 years since that speech, Eisenhower’s warning has gone unheeded, especially by the four most recent presidents: George H.W. Bush, Bill Clinton, George W. Bush and Barack Obama. The author takes each president to task for his particular failings in foreign policy or his dealings with the military. While the chapter on the second Bush administration and its manipulation of post-9/11 intelligence reports feels slightly rehashed, the chapters on George H.W. Bush (covering the invasion of Panama and Desert Storm and Desert Shield) and Bill Clinton (which addresses ‘don’t ask; don’t tell,’ as well as military incursions into Haiti, the Balkans, Somalia and Rwanda) are engrossing and thoughtful. After examining these four presidents, Goodman includes a chapter on the national missile-defense program, calling it ‘the most expensive and least effective weapons system in the U.S. arsenal.’ This program was introduced during the Ronald Reagan administration (which spent more than $60 billion to develop it), leaving readers to speculate why Reagan was not included as a president guilty of runaway military spending. Goodman waits until nearly the last page before offering ‘some good news in the overall picture.’ He offers a few words of praise for President Obama, who ‘does understand that the United States is far less exceptional than his opponents believe,’ before ending with an ominous reminder: ‘The age of the superpower is over.’ Engaging reading for those interested in foreign policy and military spending.”

“In this impassioned exposé of the astronomical costs of America’s defense policy, former CIA analyst Goodman (Failure of Intelligence: The Decline and Fall of the CIA) demonstrates how post–cold war neoconservatives, energized by the recent dissolution of the U.S.S.R. and the United States’ unrivaled position as the world’s premier superpower, promoted a pugnacious militarism that has led to a string of foreign policy debacles and unprecedented levels of military spending. Kicked into high gear by Reagan, expenditures slowed during the 1990s under Bush and Clinton, but skyrocketed after the 9/11 attacks and during the second Bush’s ‘ultra-expensive and un-winnable wars.’ Obama, having inherited ‘a national security state that violate[s] civil rights at home and human rights abroad,’ promised reforms, but has been reluctant (or unable) to actively reduce military expenditures. The military-industrial complex, presciently denounced decades earlier by Eisenhower, rumbles on. The obligatory how-to-fix-it chapter contains much bipartisan, cost-cutting rhetoric, but it’s clear that the majority of both parties in Congress consider the defense budget sacrosanct, or at least immutable. Few will finish this precisely argued polemic without the uneasy feeling that military spending is out of control.” 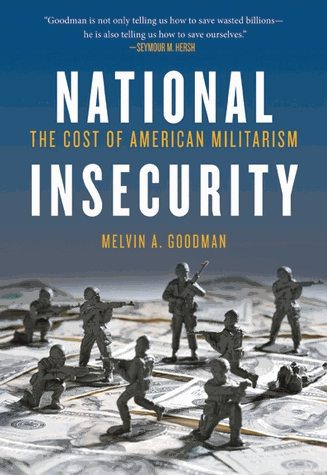